Your browser is not supported by this site!
Pages may not display or work properly. Please update your browser to the latest release of Chrome, Firefox, Safari, or Edge.

Ready access to accurate and timely state-level information is an important tool for formulating effective science and technology (S&T) policies at both the state and national levels. By studying the performance of their peers, state policymakers may be better able to assess their own programs and performance. In addition, data on variations in state S&T activities may alert national policymakers to variations in state and regional needs and circumstances. Corporations and other organizations considering investments at the state level may also benefit from this information. To address the interest of these communities in the role of S&T in state and regional economic development, the Science and Engineering Indicators State Indicators data tool presents findings on state trends in S&T education, employed workforce, R&D, patents and publications, and knowledge-intensive industries.

The State Indicators data tool includes 60 principal indicators for the United States, individual states, the District of Columbia, and Puerto Rico (when available). The data used to calculate the indicators are gathered from public and private sources. State Indicators will be updated periodically, as new data become available.

The 60 primary indicators are divided into six categories.

Student achievement is expressed in terms of performance, which refers to the average state score on a standardized test, and proficiency, which is expressed as the percentage of students who have achieved at least an expected level of competence on the test.

State-level performance data for high school students are not available for all states. Performance and proficiency data in mathematics and science are only available for students in grade 12 at the national level. Instead, mastery of college-level material through performance on Advanced Placement Exams has been included as a measure of the skills being developed by high school students.

These indicators shed light on the higher education different states provide, the level of educational attainment in states’ populations, the cost of college attendance at the undergraduate level, and state support for public universities.

Workforce indicators focus on the level of S&E training and occupations of the employed labor force. These indicators reflect the higher education level of a state’s labor force, extent of S&E employment, and national origin of S&E workers.

Financial indicators present the sources and level of funding for R&D. The indicators show how much R&D is being performed relative to the size of a state’s economy and workforce. They also present the extent to which R&D is conducted by industrial and academic performers.

These indicators show the number of new doctorates conferred, the publication of academic articles, and patent activity from the academic community and from all sources in the state. Outputs are measured relative to states’ S&E workforces, academic workforces, and financial R&D inputs.

6. Science and Technology in the Economy

Unlike the main Science and Engineering Indicators analyses, the State Indicators data tool presents indicators individually. Indicators are normalized to enable comparisons among states of different sizes, but indicators are presented discretely rather than in a form that describes the relationships among them. Because these indicators span a broad range of topics across the entire S&E landscape—inputs and outputs, people and dollars, businesses and universities, R&D and education—a validated model synthesizing interrelationships among these specific indicators does not exist. Moreover, states are both heterogeneous, with hubs of intense S&E activity alongside areas without substantial S&E infrastructure, and porous, with limited control over movements of people and funds across state borders. Consequently, other regions which form more tightly coupled economic systems or which create stronger barriers to movement may be preferred by some researchers as units of analysis for studying geographic variation in S&E activity.

Nonetheless, state governments and other state-based actors have significant leverage and can affect S&T-related economic development in their states and regions. The data in the State Indicators data tool offer ample opportunities for exploratory analysis of variations among states and the interplay of education, R&D, and economic activity. The State Indicators data tool enables users to examine the relationships among the different indicators.

Some examples of issues that could be explored with the current set of indicators include the following:

The data in the State Indicators data tool cannot be expected to provide definitive answers to any of these questions. Additional data, well-defined models, and more refined geographical comparisons will be required as social scientists grapple with these complex relationships. But exploring relationships in the existing data via the State Indicators data tool can stimulate policymakers and other stakeholders to think more broadly and deeply about the possible implications of strategies used to address state-level S&E policy topics.

Within the State Indicators data tool, the data tables present the values for the components that make up each indicator. Each table provides a national total, labeled “United States.” A few indicators have data that could not be assigned to a specific state but are included in the U.S. total. In addition, some national totals include data for U.S. territories where available. In other indicators, data may not be not available at the state level, because of confidentiality reasons, but are included in the total. Users are cautioned that due to these factors, the national totals may not match a mathematical sum of the displayed values.

The values for most indicators are expressed as ratios or percentages to facilitate comparison between states that differ substantially in size. For example, an indicator of higher education achievement is not defined as the absolute number of degrees conferred in a state because less populous states are unlikely to have or need as extensive a higher education system as states with larger populations. Instead, the indicator is defined as the number of degrees per number of residents in the college-age cohort, which measures the intensity of educational attainment relative to the size of the resident population.

Although data for Puerto Rico are reported whenever available, they were sometimes collected by a different source, making it unclear whether the methodology used for data collection and analysis is comparable to that used for the states. In those cases, comparisons should be made with caution. Data for U.S. territories and protectorates—such as American Samoa, Guam, Northern Mariana Islands, and U.S. Virgin Islands—are included in the U.S. total where available but are not reported separately.

Data, text, and visual elements are presented in the tool for each indicator. The data table view presents the data back to 1990, if available, for each state, the District of Columbia, and Puerto Rico.

The indicator text presents a description of the data series used to develop each indicator and includes information pertaining to the underlying data and source. Some indicators are also accompanied by a Quick Tip that is intended to help users understand unique qualities of the data.

The map view provides a geographic view of the indicator for the selected year of data. The map is color-coded to show the quartile in which each state placed on that indicator. This visualization helps the user quickly grasp geographic patterns. On the indicator maps, the darkest color indicates states that rank in the first or highest quartile, and the lightest color indicates states that rank in the fourth or lowest quartile. Gray indicates states for which no data are available. The values of the indicators may be viewed on the state map by placing your cursor over the state. All the indicators are broad measures, and several rely on sample estimates that have a margin of error. Small differences between state values generally carry little useful information.

The charts view is a representation of each indicator over the years for all states. These mini graphs show the trend over time for each state alongside the United States trend. The charts are presented in relative geographic distribution. This order can be re-sorted alphabetically by state abbreviation or by highest value for the most recent year of data.

The bar chart view presents a state distribution of each indicator for the selected year of data. States are listed in ascending order according to the indicator value, with the state with the highest value at the right. State quartile ranks are indicated by the same coloring pattern used in the map view. The national average for the indicator is shown in a dashed horizontal line for reference. 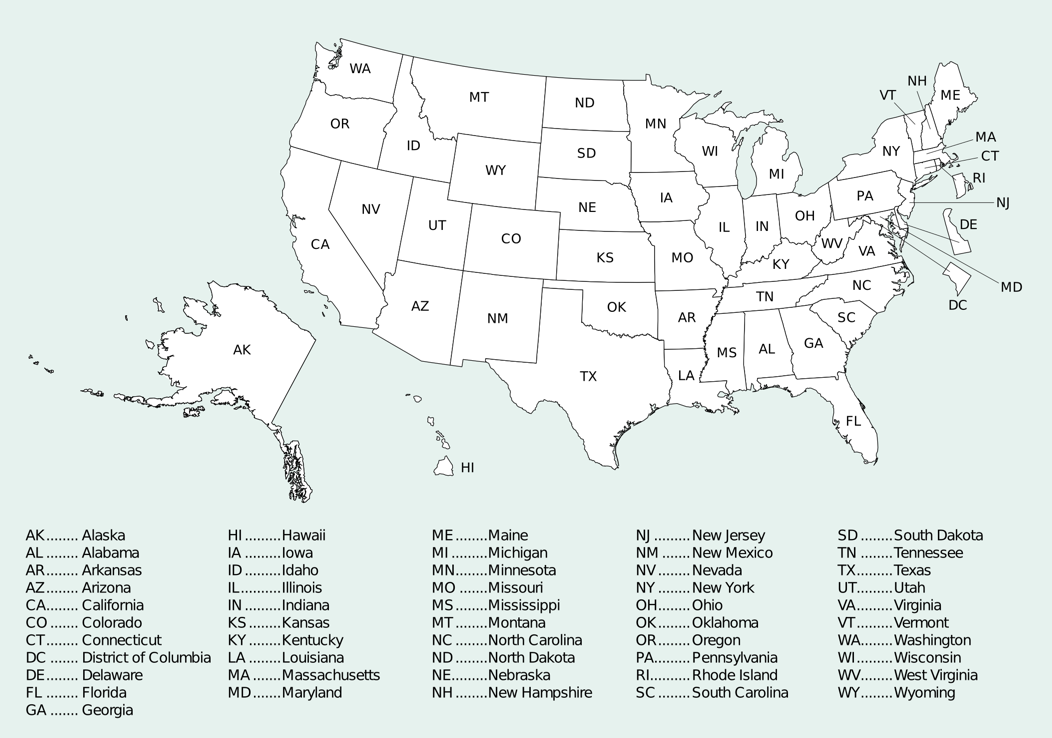 The current version of State Indicators was developed by the data team at Alley, under direction from NCSES:

This project was supported by the following individuals at NCSES:

¹ The indicators provide data on fourth grade and eighth grade science and mathematics performance and proficiency.